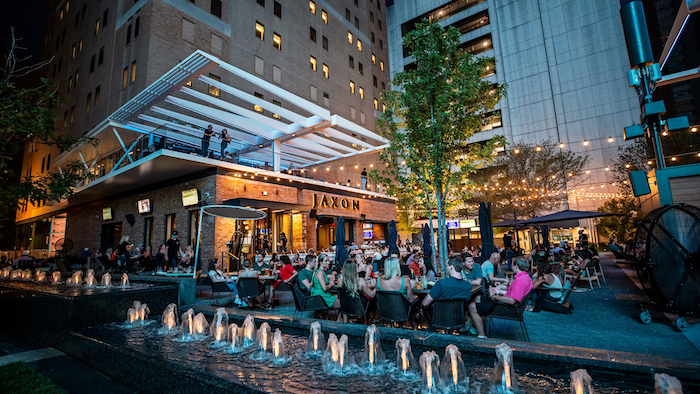 One of Dallas' newest go-to spots is JAXON, which is steps away from several downtown hotels and a short walk from the Kay Bailey Hutchison Convention Center.

If you are looking for a great patio to host your next group or meeting in Dallas, you will not be disappointed. Dallas has exciting venues that feature barbeques, cocktails and entertainment.

For example, Terry Black's BBQ in Deep Ellum has enticing indoor and outdoor spaces. A second-floor deck offers views of the action along Main Street, with space for your group to distance from the rest of the restaurant’s patrons.

STIRR has two locations, and both can accommodate large groups. At the Deep Ellum location, the rooftop terrace is perfect for catching the sunset over the Dallas skyline, while the North Dallas location is situated near the Renaissance Dallas Addison Hotel.

One of the original mega patios in Dallas, Happiest Hour has been a long-time favorite thanks to its proximity to the American Airlines Center. Today, the 12,000-square-foot space remains a favorite because of its amazing city views and impeccable happy hour specials.

With seven concepts, Restaurants on Lamar is situated just steps from the convention center. Options include Biergarten, a German-style beer garden that can accommodate up to 110 in its outdoor space. Cafe Herrera, a locally owned family restaurant serving up Mexican cuisine, has space for up to 200 people on the patio.